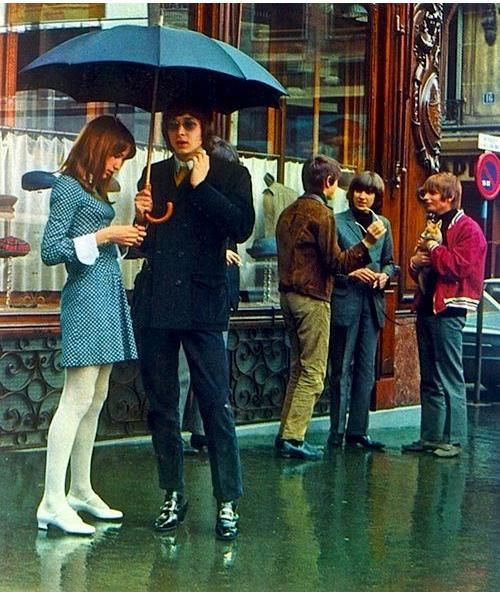 First I had my difficulties with the term “Mod” because I tried to find the leitmotif in this Genré but there was none. I think the best way to look at Mod in the context of “Evolution of Genré” is to understand it as an umbrella term for a multiplicity of music styles, that the subcultural movement called “Mod” used to listen to. More confusing does it get when one look at the origins of the term itself. Mod is an acronym for “Modernist”, originally a person from the Modern Jazz Scene. Modern Jazz was nearly out of date when the Mod culture started to take over London, Britain and eventually the whole world. Even Japan found itself in some mod revival hype in the ’80s (“Bōsōzoku”). Before I continue with the actual “Mod-Music”, let me draw you a more detailed picture of the subcultural correlation.

It’s said to have started all in London around the early ’60s. Like a timely delayed echo of the so-called Merseybeat. The Mod culture gave distinction to the term “Swingin’ London” with a representation for expensive clothes, motor scooters, street battles between them and “rockers” and finally their love for Blues, Soul and Ska tunes. This met the British rhythm & Blues as well as the ongoing Beat-hype in the ears of the youth of the United Kingdom. These are the main ingrediency for the typical “Mod” musical appearance, although Ska became more popular in the Mod Revival in the ’70s, where it was close to Punk and partly explains their love for Ska. As contrary as it seems, the Mods saw themself as antagonists of the “Rockers” like the dispute between the Hipsters and the Rockabillies in the US ’50s. So did the Revival Mods with the Punkers. In both cases, they influenced each other heavily which makes the whole circumstances a matter of absurdity. I guess the most important fact that differed between Mods and the Rockers was that the Mods’ youth was part of the working class, as well as the other party. But while the Rockers identified somewhat with their origin, the Mods tried to create another image. The image of the snobby, well dressed, but still cool, masculine and bohemian snooty-nosed little upstart.

Consumeristic behaviour, shopping and celebrating life in a very peculiar kind matches with the certainty that the whole subculture is built on elements that were part of something else. As we are talking of working-class Mods, this was mainly important to escape from the humdrum of their daily jobs. The Mod scene is built with bricks taken from here and there and sometimes seem a bit uncreative in creating something new. It’s a big collage of styles and cultures, as they adopted parts of the French and Italian swing of the day and rounded it down with the British roundel of the Royal Air Force as the most famous identifying feature nowadays. Nevertheless, the Mods had an impressive impact on the subcultures of the late ’70s and ’80s when it comes to the revival.

What is Mod-Music? Or should I ask: what does a Mod listen to? No, I shouldn’t although the question is eligible. As it is with the style and behaviour, it is with the music as well. The Mod Music was partly a copy and paste game, but evolved a core, which is truly unique. That’s what really can be called Mod-Music. Because Ska remains Ska, regardless of who listens to it, the same goes for Beat music or anything else. But the music that was born out of the heart of the Mod movement starts being of interest here. There are a handful of bands of fame, that serve as superb exemplars.

THE KINKS; The song “I Gotta Move” (in Mod-Playlist →) is full of bluesy rhythm, has the Beat in the rhythm as well, unobtrusive chorus like we find it in the Merseybeat. “Don’t you Fret” (in Mod-Playlist) is performed in a UK army song manner, with loads of rhythms in the guitar section again that make the Skiffle roots visible. Songs like this draw a clear line to what became UK Punk a decade later, where we are again at the point to see the impact of the Mods. Like The Who the Kinks are harmless, but somehow already have a wild beast in the bush waiting to attack, which later turns into Freakbeat). THE WHO’s “Anyway, Anyhow, Anywhere” (in Mod-Playlist), is a souly Rhythm & Blues number that smashes without refusing the Beat elements. Generally, most of The Who’s songs from the early to mid-sixties can be described like that. “Just you and me, Darling” (in Mod-Playlist) for example; although it is less subtle but rather apparent Blues Rock. “Leaving Here” (in Mod-Playlist) makes the soul concrete and feelable when the tune is playing. What came along as stylistic separate elements found a rebirth through Mod. That’s the above mentioned moment Mod started being creational in its core and stopped being that loose copy game. THE ANIMALS played more traditional Blues, but had a Beat connection as well, especially in their vocals, while THE YARDBIRDS were much rockier. Even THE BEATLES had some swingin’, indeed very moddy R&B tunes in their earlier days, such as “Slow Down“, “I’ll Cry Instead“, “Any Time At All“, “When I Get Home” which all can be found on the “Something New” LP.

The résumé of my Mod exploration is that the most important components are British Rhythm & Blues and Merseybeat. Soul occasionally appears (UK’s Northern Soul is a chapter of it’s own) and Ska was more important in the late 70’s Mod revival. In the end, I’m surprised about the inventive skills the British youth unearthed those days. Just like Yé Yé implemented a metamorphose from inspiration to uniqueness. Soul is no longer Soul, Blues no longer Blues, Beat no longer Beat; It’s like a chemical reaction and in this massive explosion a new element was found; MOD! That’s why words don’t help much here, you have to listen to it! ~Written by DJ Kahuna, 2021 for www.rum-n-coconutwater.com