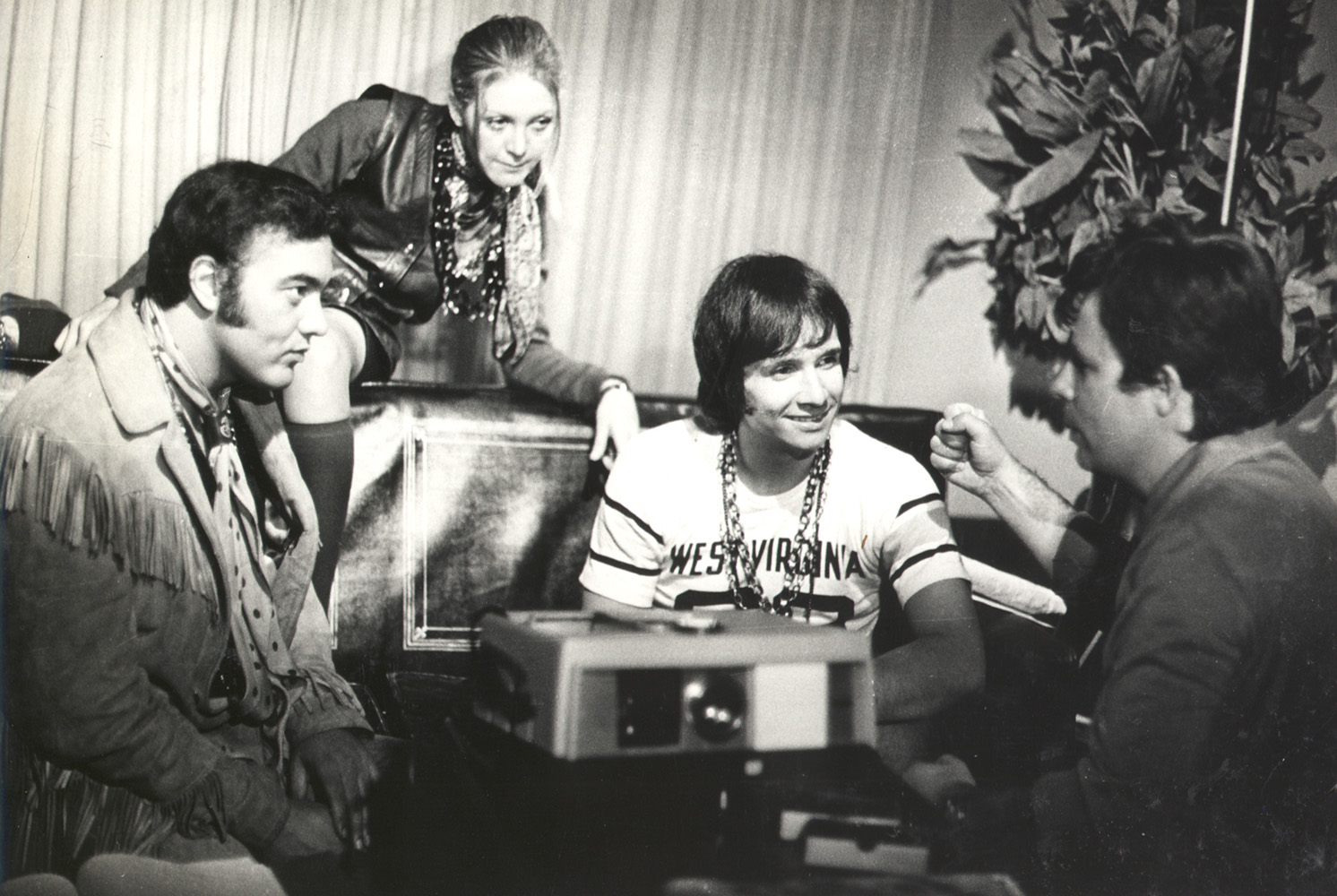 Jovem Guarda was the Brazil Beat and Pop movement of the early to the late sixties. Like I explored it already in southern Europe (Yé-Yé), the Netherlands (Nederbeat) and Japan (Group Sounds), also Brazils’ youth coveted the UK & US sound that conquered the world rapidly. While Brazilian music and lifestyle imitations and interpretations started at the end of the 50s with petticoats, jukeboxes, oldtimers, wild Twist dances, Teen Pop and Rock’n’Roll, 1963 (the birth year of J.G.) held a surprise that lead to an initial kickstart of what was to become “ie, ie, ie”, the first official umbrella term to describe the new movement of teen excitement in this new sound. Like Yé-Yé the name leans on the Beatles’ “Yeah Yeah Yeah” in their song “She Loves You“. The Beatles indeed were a central idol and role model in the Brazil movement. The artistic and subcultural hype resulted in a quite popular TV show set up and first aired in 1965 in São Paulo. Due to the national success, it became a leading source for a whole teen movement of hipness and style. The show even trendsetted popular slang phrases used among young people. Extravagant and colourful cloth and a laid back cool attitude established, just as it did in swinging London. Representing and commercialising the movement at the same time, “Jovem Guarda” as a term even replaced the previous “ie, ie, ie”. The J.G. show host Roberto Carlo among Erasmo Carlos and Wanderléa, all famous musicians, played interpretations of the Anglo-Saxon hits of the day. Among those three in-house artists of the TV show, national bands got invited to play in front of millions of viewers.

The J.G. scene evolved as other movements around the world did. Optically and sonic it had much of the styles in the US and UK. Yet, the Brazilian sound of the sixties coated very softly, loose and poppy, so soft it’s sometimes hard to say if the music is Songwriter, Easy Listening, Surf Rock, Beat, etc. … Of course, this makes it hard to narrow it down to Jovem Guarda. Especially when the brass section follows up and drenches everything in a latent light of Latin/MPB sound. However, one of the most famous Jovem Guarda albums is “O inimitável” by Roberto Carlos, who was the host of the previously mentioned TV show. In fact, it’s so loose that I feel uncomfortable calling it Jovem Guarda, besides it has no serious Beat, Surf or Psych aspects to it. There are other bands with that soft & loose sound, like “Raulzito e os panteras”, but they still managed to include stylistic elements to work with as did Roberto Carlos with his further albums too admittedly. The differentiate details and nuances yet remain in obscurity to non-portuguese speaking foreigners but might reveal with the years. I’ve heard saying, that Brazil has no real filing culture, that conserved and archived their subcultural history as we know it from other countries in Europe and US. This causes a very open understanding of this genré definition. This article is the extreme opposite with the aim to nail it down. So, what do we have here? Beat, for sure! Surf/Instro, a little bit, flavouring the Beat sometimes. What’s more? Early teeny R’n’R sound with a note of Twist. Tons of Pop and in the later sixties some fuzz, effects and Psychedelia. One could say it has anything of the major 60’s sound ingredients. Looking at the whole picture Pop is quite present but not in every song. There are tracks by Erasmo Carlos or Wanderléa for example, that are bassy and precise with strict rhythms oscillating between early 60s R’n’R/Teen Pop and Beat/Garage.

The Name “Jovem Guarda”, meaning “young guard” came from a Lenin quote (“The future belongs to the young guard because the old one is outdated.”) and gave an empowering statement to the new generation. Contrary the whole movement had to face repression and censorship through the military Brazilian government and eventually came to an abrupt end in 1968. A few releases came out afterwards too and Brazil also saw a Psychedelic Rock episode, which hadn’t happened in the same matter without the cutting-edge work of earlier R’n’R & Beat Music Jovem Guarda. ~Written by DJ Kahuna, March 2022