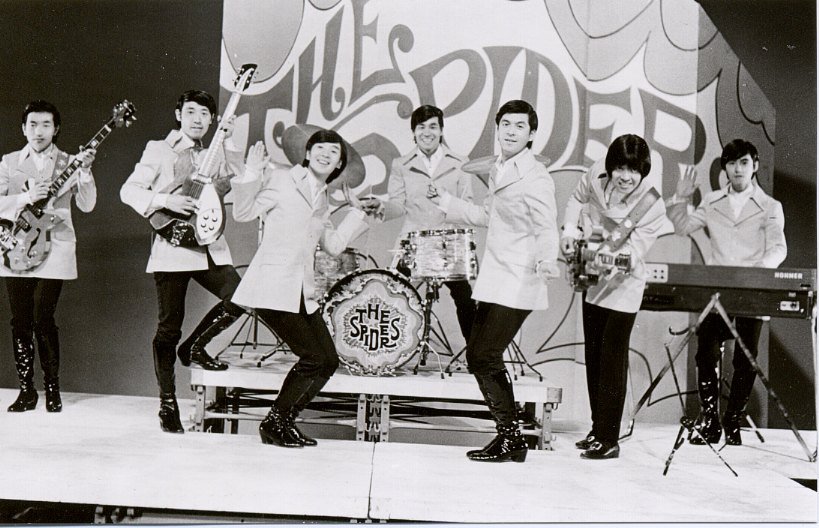 Group Sounds (Japanese variant of US Garage/Psych) | Evolution Of Genré

As a western citizen, any excursion into exotic cultures is a complex undertaking. Concretely spoken I’m examining the so-called “Group Sounds”. A Japanese answer to the western musical and cultural movements of the sixties. As an copyist country, also Japan’s Group Sounds merely consist of an immitation of US music, although one or another uniqueness might have been created.

One major benefit for the free expression in art was the alliance with the USA. Artists from Japans neighbour countries – involved in the “Warsaw Pact” – had not many chances to find their way into a free creational process as censorship hung upon everything like a paranoid, control obsessed demon, fearing anything could cause a political collapse. Beginning in the ’50s, Japan joined a worldwide process of change. As an effect of a cultural opening, this was a to date unique event occurring for the first time in Japan’s history.

Even the sixties with their global tend for freedom and peace evolved from the narrowness of previous decades. However, Japan holds an exceptional cultural position. Maybe more drastically than in other (western) countries, any kind of individualism might be seen as an offence to the national collectivistic mentality. Following the logic of collectivism, any of such arguments have their understandabilities. But an individualistic conviction hasn’t necessarily a selfish or egoistic, or system harming action to follow. Especially in the sixties, subcultural aims on a higher level (partially) matched with those of society. I’m thinking of harmony and peace. But thinking further about it, lot’s of non-identical values are to be found on the other hand.
Social and economic cadence, teamwork and a grant for a running system weren’t what a sixties youth necessarily was looking for. Japan being culturally more sensitive for individuals, brought the hip post-war generation some additional burdens. Kids in the USA for example had it much easier, as individualism is ever since part of the States from the moment the first immigrant trials appeared.

So far in brief about the cultural background. Musically seen, the great umbrella for Japanese hip(py) music in the sixties is the so-called “Group Sounds” (short GS). Like Yé-Yé, Mod, Jovem Guarda or Nederbeat – GS has its very own constitution.

GS originated from an interpretation of western popular music. Earlier, before GS started, the music of the day had been somewhat to be called Japanese popular music, the equivalent to “Traditional Pop” in the 50’s Europe or US. So releases like “Sukizaki and other Japanese Hits” by Kyu Sakamoto are pointing very directly where it’s at. As a mirror of the cultural and economic opening of Japan, Japanese popular music (50s to 80s, also called “Kayokyoku”), mixed with straight but translated cover songs of big US chart breakers. “Sukiyaki” is as innocent and lovely as Peggy March’s “I’ll follow him” or “Mister Moonlight“. US Traditional Pop and Instro Surf Rock shaped an interesting new Sound. The 1965 album “Beat! Beat! Beat!” by Takeshi Terauchi & his Blue Jeans nailed the new sound on the wall. Reminding me of one of the Venture’s cheesy studio LP’s, but performed with much more enthusiasm. So do the “Blue Comets” and lot’s of other groups. Although the so called “Eleki” sound (Japanese Surf Rock from the early half of the sixties) intermixed with early japanese GS and Garage Rock, just as it did in the US, the Spiders’ “Bom! Bom! Bom!” shows the next level and finally the birth of GS. A slice of Garage Rock became a new layer to the Japanese Pop Music and the Instro Eleki sound. The effects the British Invasion had on the US sound those days, it was synchronically adapted in the GS as well. British R&B, Beat Music and Freakbeat emerged with the with Garage Rock in the States, so the copied japanese version cullminated also in Beat flavoured tunes as you will hear in the DJ-Set embedded at the bottom of this article.

Strongly influenced by the US Westcoast Sound, the Garage Rock got its fuzz and electric organ as well across the sea in Japan (“The Spiders – Kaze Ga Naiteriru“). But while the sixties moved forward our fancy layered cake of GS included more ingredients. Clearly on hand it is no big step from Garage+Fuzz+Organ to Psychedelic Rock. From here it’s pretty easy to describe what happened. The US sound was imitated and often covered again. The Japanese accent imparts a certain charm to covered tunes like “House of the Rising Sun” by Yuya Uchida. The final breakthrough to pure Psychedelic Rock happened as well in terms of GS, but was rather rare as most records still had the Garage-Psych imprint in the late sixties (“Haik” by The Mops or “Over Under Sideway Down” by the Beavers). Exceptional pieces like Harumi’s “Hello” need some research to find. Such one is not a psychedelic extension of Garage Rock, but psychedelic by all means. Synchron to the western world, the music developed and changed a lot around 1970. In Japan, the musical horizon grew wider the same. But the golden days of GS were over and most GS bands disbanded or changed their sonic appearance. However, Psychedelia itself in Japan did not disappear. Classic Rock gems by Suki Shinki, The Flower Travellin’ Band or “Speed Glue & Shinki” carried Psychedelia further. But that’s a topic of it’s own to be continued.

So my résumé for Group Sounds is, first of all, to see it as an integral umbrella term for a music style of a whole decade with several outgrowths. “A Japanese interpretation of the US 60’s Garage, Beat & Psychedelia” – would be the very short recapitulation of this article. ~Written by DJ Kahuna, 2021 for www.rum-n-coconutwater.com